An audio recording of this blog post can be found below:

“What is ME?” and “How can it be treated effectively?” Everyone in DecodeME desperately wants answers to these questions. At DecodeME we have always thought that this study alone may not provide all the definitive answers we need. Instead, we see our project as mapping out what future research directions should be taken and what treatments could be considered. We think of it as drawing a treasure map for other researchers, marking out places to dig and pitfalls to avoid. 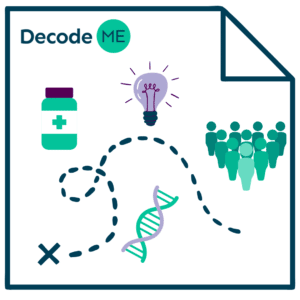 If DecodeME’s map points out problems in the nervous or immune system, for example, or in mitochondria, then we will ask expert researchers in these fields to start digging to uncover the causes of ME.

The genetic map covers all human DNA – a ‘Treasure Island’. Genetic studies are particularly good at uncovering causes of disease. That’s because there’s no “chicken-and-egg” problem with genes: DNA comes first and the disease develops later. Whereas with most other research approaches, it’s hard to tell if ­­­what’s been measured is a cause or an effect of the illness.

Furthermore, it’s a myth that difficult biomedical questions are answered by a single project or researcher. It usually involves dozens, if not hundreds, of scientists and also, in DecodeME’s case, thousands of people with ME/CFS. Currently, researchers are setting off on lone expeditions to find ME’s treasure trove and without a map to follow.  When we have the benefit of hindsight, we see that many directions taken were actually false leads, and that some expeditions may have missed vital clues simply because they didn’t include scientists with specific knowledge among their team.

DecodeME’s treasure map may end up, we hope, leading scientists to one location – indicating a single genetic source of ME problems.  Or, much more likely, several- meaning that ME has more than one explanation and many areas to dig for treasure and answers.

Digging down to the treasure’s location will not be the end of the expedition either. Drugs will still be needed to treat the problem that has been revealed. Think of it this way: discovering the treasure chest ends the first challenge, but the second is finding the key that unlocks the chest. Hopefully, a key (i.e. a drug) already exists, but otherwise a new one will need to be made. Unfortunately, developing a new drug is laborious, expensive and often unsuccessful, and it won’t be a quick reward. But having a genetic map doubles the chance of ultimate success.

DecodeME isn’t the end to ME research. Rather, it’s intended to draw a map to guide future research. We’ll show this map to any scientist who’s interested and, we think many will be. Importantly, these scientists’ future expeditions to find the biomedical causes of ME will also need funding, so the UK Government’s pledge to develop a new ME research plan will be critical to continuing the search that DecodeME has begun.

The next important question is “When? When will an effective therapy be available?”  We don’t know the answer to this. But, however difficult the future research journey, we believe having DecodeME’s genetic map in-hand means that ME science will make its desperately-needed breakthrough sooner than without it.