A genetic study can help because DNA studies are particularly good at identifying the root causes of disease.

The problem: biological differences might not reveal disease causes

Researchers often find biological differences between people with ME/CFS and healthy people. These include differences in immune signalling molecules called cytokines, differences in mitochondria, the power stations that provide fuel for our cells, and much more.

These are interesting results, but they have not revealed ME/CFS’s causes. Biological differences might simply come about because people are chronically ill: they may not be causes, but downstream effects. Finding biological differences will not necessarily lead researchers to causes of ME/CFS. 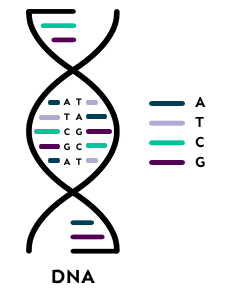 DecodeME is studying DNA because it cuts through the cause-or-effect problem – the disease does not change the genes we are born with. Our DNA came first, and the illness developed sometime later.

So, any DNA differences associated with ME/CFS must play a part in causing the illness, rather than being a downstream effect of it.

Of course, there must be genetic causes of ME/CFS for this approach to work and it appears there are. While there is no evidence for a single “ME/CFS gene”, the studies show that if you have a family member who has ME/CFS , your risk of getting the illness yourself is higher – even if you don’t live together. This shows that the risk of getting the disease is inherited – it has genetic causes.

Therefore, DecodeME’s goal is to find genetic differences linked to ME/CFS: clues that would help find root causes of the illness.

How DNA differences can point to biological causes

There are two ways in which DNA differences can point to biological causes:

Scientists hope that DecodeME will provide clues to the biological causes of ME/CFS in a similar way. More research will then be needed to follow up on these clues and confirm if they do indeed identify root causes of the illness.

A big DNA study effectively scans the whole of human biology. This means it can identify genetic evidence linked to areas already under investigation, but it can just as readily uncover clues that were not even on researchers’ radar.

This was the case for the possible role of glial cells in Alzheimer’s disease. Researchers had focused on nerve cells, which show obvious signs of damage in the illness. Glial cells are a potential new target for drugs in a condition where many previous treatments have failed.

Researchers can easily compare genetic results from different diseases to see if they share genetic causes. If they do, scientists can test an existing drug shown to work for one condition on another with a similar cause.

For example, the immune pathway identified for Crohn’s disease showed up in other autoimmune diseases, and drugs used to treat Crohn’s disease were later shown to work for some of those other diseases.

If DecodeME finds a genetic cause that also contributes to another disease, one with an effective drug, that drug could then be tested as a treatment for ME/CFS.

Big DNA studies are still relatively new, but they are a powerful research tool that have helped in many illnesses. Finding a cause for ME/CFS would be a breakthrough, and DecodeME scientists hope that the study can make this happen and ultimately lead to treatments.

DecodeME started recruiting its first participants in January 2022. It will slowly build up recruitment in the coming months, and its first results are expected next year.

If you haven’t already, you can register your interest to take part in DecodeME and please ask others with ME/CFS to do the same.