How do you find treatments for a disease like ME/CFS, where nothing is known for sure about its causes?

One way scientists can now look for answers is with very large DNA studies, like DecodeME. This fairly new approach is already giving insights and pointing to treatments for a range of illnesses, including rheumatoid arthritis, type II diabetes and even severe Covid.

The clue lies in our DNA 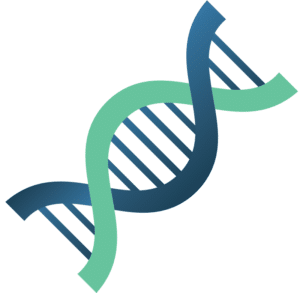 DecodeME will use small differences in the DNA of people with ME/CFS to look for biological causes of the disease.

DNA is the master molecule of life, storing all the information needed to make and run the human body. The information is stored in DNA using chemical letters. There are only four letters, but our DNA contains a sequence of 3 billion of them, like a very long book.

Mostly, our sequence of letters is exactly the same as those of the next person. But for around a million positions in the book (fewer than one in every one thousand), the letter can differ from person to person.

Scientists then compare these DNA letter differences between people with an illness, such as ME/CFS, and healthy people. Often, they find that a few of these differences are slightly more common in people with a particular disease than those without it.

These DNA differences, perhaps only a dozen or two, are clues to what is going wrong in an illness.

Here are five examples where the differences found by big DNA studies have helped scientists to understand the biological causes of an illness and to develop treatments. 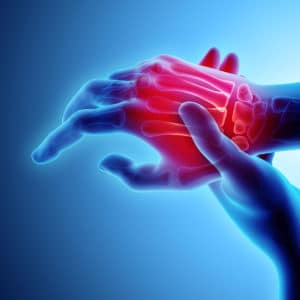 In rheumatoid arthritis, the body attacks some of its own proteins, causing joints to swell painfully. The illness affects roughly one person in every hundred worldwide, around half a million people in the UK.

Scientists knew that a big part of the problem in rheumatoid arthritis is that some proteins become chemically modified. The immune system sees these modified proteins as “foreign” and attacks them with antibodies and in other ways. It is one of many autoimmune diseases.

The damage and the inflammation that result from these attacks lie at the heart of rheumatoid arthritis.

Big DNA studies have indicated that the disease starts with the enzymes that modify the proteins. As a result, researchers are now developing drugs that target these enzymes, as potential treatments for the illness.

Because scientists have done these big DNA studies for so many different illnesses, they can compare findings between different diseases. Quite often, the molecular causes found in one disease show up in other diseases too.

As an example, researchers found that one part of the immune system, the IL-23 pathway, can be overactive in  Crohn's disease (an inflammation of the gut).

Researchers had already found that the same pathway is a problem in psoriasis, where there are scaly patches on the skin caused by inflammation - and drugs had already been developed to treat this problem. Trials showed that one of these drugs also works for Crohn's disease and has now been licensed for its treatment.

It is possible that DecodeME will find some people’s ME/CFS shares a cause with other illnesses. If that’s the case, and there are already effective drugs for these diseases, DecodeME could provide a fast route to treatments for those people.

Type II diabetes affects huge numbers of people. In the illness, the body is no longer able to control blood sugar levels properly with insulin. This leads to health problems including heart disease, damage to sight and kidney issues.

Obesity is one cause of type II diabetes, but DNA studies helped to pinpoint a number of biological causes. Some DNA differences mean the body struggles to make enough insulin. Others mean that some cells don’t respond properly to insulin. All the changes make it harder for the body to control blood sugar levels – the root problem in diabetes.

However, an unexpected DNA finding pointed to a key role for a protein that takes zinc, a vital nutrient, into cells. As a result, scientists are now developing drugs that target this zinc-transporting protein as a possible treatment. 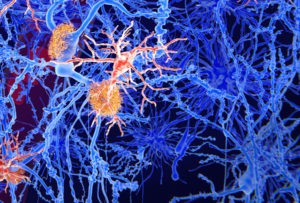 Microglia cells (shown in orgage) play an essential role in keeping the brian healthy and DNA studies have indicated they play a role in Alzheimer's disease.

This disease affects half a million people in the UK and it is expected to affect even more in future as the population ages. Several drugs have been tested as treatments but with little success to date.

Big DNA studies are providing new clues for scientists. Most research has focused on nerve cells in the brain and these are the stars of the brain show. However, to work properly, nerve cells and the brain need a support cast of other cells called glia.

The latest DNA studies indicate that these glial cells play a role in the illness. This insight may provide researchers with a new way to understand and then tackle a devastating illness.

More than a million people have been hospitalised and close to 130,000 people in the UK have died from Covid-19. There are a few treatments for severe covid, but they only help some people.

Looking for answers, scientists quickly set up a big DNA study, comparing healthy people with those who got severe covid. Several of DecodeME’s own researchers were on the team.

Although age is a big risk factor for severe covid, researchers also knew that for many viral infections DNA differences can increase the risk of a severe illness. They expected the same for Covid.

The study found two types of DNA differences that increase the risk of severe covid. One type reduces the levels of interferon, a molecule the body produces to protect itself against viruses. The other type leads to increased inflammation in the lungs.

Researchers are now using these new insights to see if they can find better life-saving treatments for severe covid.

Big DNA studies are still relatively new and the science that drives them is developing all the time. But these five examples show the power of the approach.

Looking for answers across human biology

One of the main advantages of big DNA studies is that they look across all 3 billion letters that make up the DNA book of life. This means that they are effectively scanning the whole of human biology.

This is particularly important for a disease like ME/CFS where we know so little - you don’t even need to know what you’re looking for.

There are no guarantees with any research study, but we hope that DecodeME will make a big difference.

First, we need to find 20,000 people to take part. If you would like to be one of them, please sign up and you can be first in line when we start recruiting in the autumn.